Deadline : Tim Blake Nelson is one of the hardest working character actors in show biz with a near 20-year resume. He raised his profile in 2000 when he starred as one of the three leads in the Coen Brothers’ O Brother, Where Art Thou? opposite George Clooney and John Turturro. And his phone hasn’t stopped ringing since with credits that include Steven Spielberg’s Lincoln, Terrence Malick’s Thin Red Line, The Incredible Hulk and a turn on Tina Fey and Robert Carlock’s Netflix series Unbreakable Kimmy Schmidt. But, Nelson for several years has had a serious side gig as a filmmaker at the center of New York’s indie scene. When on location, Nelson writes screenplays and even edits too, having spliced together his directorial debut Eye of God in between acting sides on the O Brother. To date, along with Eye of God, he’s made six features including O, The Grey Zone, Leaves of Grass, the NBC 2006 TV movie Haskett’s Choice, and Anesthesia which is premiering at the Tribeca Film Festival on Wednesday, April 22 at 9PM at the Borough of Manhattan Community College.

While studio executives often gripe about the gamble in mounting dramas, Nelson has a knack for getting his feature ambitions off the ground, topped off with a number of notable prestigious actors. Some indie filmmakers have to wait years to get their films funded, or have to grin and bear an actor’s unavailability before rolling, however, Nelson admits, “I have not found it incredibly difficult to get my movies financed with one exception, my project Seasons of Dust. At a certain point it seemed to be financed, but then fell apart, but I intend to make it. I have a sense of how to get my indie projects off the ground.”

Nelson doesn’t wince at the industry’s whining about dramas. For Nelson, no indie drama is stigmatized when it come to financing. “I think at the right budget with the right cast, and the right vision you can make a movie. It’s not necessarily going to make a lot of money, but none of us are making money as we work for scale. But when we get our movies made, we all end up subsidizing because the market is so squeezed.”

His latest film Anesthesia was funded from all private equity, “a combination of somewhat sophisticated movie financing and first-time investors” says Nelson giving a shout out to his producers Julie Buck and Josh Hetzler who handled the money-end. Anesthesia was funded before Nelson secured his cast which doesn’t happen that often in the indie finance world . “My financiers knew because of my track record that I would deliver a good ensemble, and that made them feel safe about their investment,” says the director/actor.

In general, Nelson makes his films for seven figures. His first film Eye of God was made below seven. “My attitude is you have to make the movie for a price where investors have a good shot at making a little bit of money. All of us working on the film are subsidizing it. I’m not asking investors to do that. I feel very responsible, grateful and beholden to the people who invest in my movies.”

Anesthesia takes place over a 24-hour period and follows a Columbia University professor, Walter Zarrow (Sam Waterson) who is mugged on his apartment doorsteps. The film follows the chain of events that triggered the attack, while bringing together a number of people in Walter’s life including his son (played by Nelson), his daughter-in-law (Jessica Hect), a troubled student (Kristen Stewart), a cheating spouse (Corey Stoll) and a drug addict (K. Todd Freeman). Glenn Close, Michael Kenneth Williams and Gretchen Mol round out the cast. Even though Manhattan has been a safer place since the Mayor Rudy Giuliani era, Nelson says that muggings “happen near the Columbia University area. I live on 104th Street and this film is about my neighborhood. While you can walk around New York and feel safer than than you did during the ’70s and ’80s there are still areas where you can get mugged in the city, like any city in the world.”

Casting is also a painless process for Nelson, thanks to the actors, as well as their reps, that he has gotten to know over the years. Not to mention, Nelson isn’t above cold-calling a manager or two to get who he wants. His golden rule is “I don’t go out with a script unless I know the roles are going to appeal to the sorts of actors that will attract financing.” When it came to landing Twilight actress Stewart in his film, “it wasn’t challenging at all. I just texted her and sent her the script. She read it and texted me back ‘Yes’”, says Nelson who is an acquaintance of Stewart’s. The cast for Anesthesia was assembled in two and half months, with casting director Avy Kaufman leading the charge, particularly with the younger actors. Nelson didn’t know Waterson, rather met him over lunch after being pursued by the actor’s manager Keith Addis.

In the past, Nelson has landed such top-shelf talent as Edward Norton, Susan Sarandon, Kerri Russell and Richard Dreyfus for his 2009 directorial Leaves of Grass about an Ivy League professor who returns to his Oklahoma hometown, only to contend with his pot-growing twin brother. For his 2001 Holocaust film Grey Zone, Nelson landed Harvey Keital, Steve Buscemi, Natasha Lyonne and Mira Sorvino. It grossed $518K at domestic B.O. for Lionsgate. Nelson’s highest grossing directorial is his millennial version of William Shakespeare’s Othello, entitled O which made $16M stateside for Lionsgate in 2001 and starred Josh Hartnett, Mekhi Phifer and Julia Stiles.

However, Nelson emphasizes again, “I will not send out a script that is going to get passed on. I’ll sit on it and write for months and months. I know when it’s not ready. I know when a script is not working. I’m very patient. You only have one chance for actors and their reps to read your material, and I let folks know that if I’m sending out a script, it’s well worth reading. Even lesser known actors can be quite choosy.”

As a filmmaker though, one thing Nelson is picky about is that “I still want my movies to be seen in movie theaters”. While Nelson understands indie distributors’ needs to make their release models work with theatrical-VOD day and date; it’s not an auteur’s ideal deal.

Says Nelson, “When we are all making the movie, the production designer, the DP — we’re all thinking of our film for the big screen where a lot of strangers have gathered for a collective experience with great sound and beautiful, immersive colors. That’s what I’m still after. I’m less interested in home viewing experience when it comes to film.” 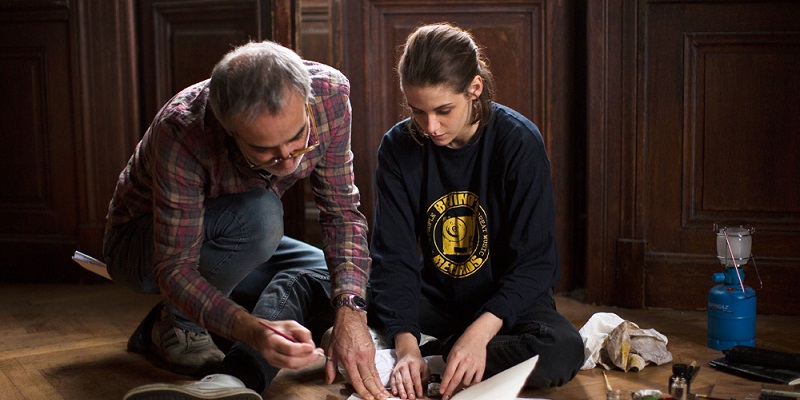