Kristen participated in this year’s New York Times magazine Great Performers : L.A Noir. This compilation of short films shows some of this year’s Hollywood greatest actors, shot in a virtual reality setting. You’re a star in this virtual-reality film. You play Kristen Stewart’s dying lover, who got caught in her crossfire.
You can find below pictures, screencaps and article about this year New York Times Great Performers short films.

The Year’s Most Captivating Film Performances
The Times critics Wesley Morris and A.O. Scott discuss how the year’s best acting showed us two kinds of power: One found in professional experience, the other in the experience of being alive.

MORRIS: Huppert is among the last of a dying breed of psychological star. That kind of acting has tended to be closely associated with the Europeans and the Method people, but is it nuts to watch Kristen Stewart work and think: She could be Huppert’s daughter?

SCOTT: No more nuts than my own hunch, which is that Kristen Stewart is the new Robert De Niro. Back in the ’70s and ’80s, De Niro’s reputation as the best actor in American movies rested on his ability to vanish completely into each role, to effect a physical and psychological transformation so total that you could barely recognize him from one movie to the next. Some of what he did was a matter of what you might call technical extremism: learning Sicilian dialect for “The Godfather Part II,” pushing his body from sinewy fighting trim to has-been bloatedness in “Raging Bull.” Stewart hasn’t quite done that yet, but she burrows as deeply as De Niro ever has into the interiors of her characters, arranging her expressions, her carriage, her vocal inflections — even, it can seem, her height and bone structure — accordingly.
You could say that, having been made, perhaps reluctantly, into a movie star by the “Twilight” movies, she has lately reinvented herself as the character actor she might have always preferred to be. Apart from her lead performance in Olivier Assayas’s “Personal Shopper,” she has been an ensemble player in 2016, with roles in Woody Allen’s “Cafe Society,” Kelly Reichardt’s “Certain Women” and Ang Lee’s “Billy Lynn’s Long Halftime Walk.” But the fact that she’s the most interesting person in all of those movies suggests that her movie-star charisma is still intact. She’s just using it in subtle and occasionally subversive ways.

MORRIS: I think Kristen Stewart is just about the best American movie actress we have. Her bad romance with movie stardom has served her well, because early exposure to its toxins might have fortified her resistance to mere fame. Unlike with, say, Ben Affleck, there’s no tension or ambivalence between her being an actor and her being a star. She appears to have rejected the latter to insist upon the value of the former. Lots of people can have it both ways, but it’s a balance that takes a while to achieve. Look at how long it took for Meryl Streep and Leonardo DiCaprio, whose allergy to overnight godliness foreshadowed Stewart’s. In the meantime, it’s fascinating to watch her flirt with stardom in the films she takes and the women she plays.

KRISTEN STEWART
PERSONAL SHOPPER • CERTAIN WOMEN • CAFÉ SOCIETY • BILLY LYNN’S LONG HALFTIME WALK “WITH GRACE, STEALTH AND STARTLING MODESTY, THIS ONETIME TEEN-FRANCHISE STAR HAS FASHIONED HERSELF INTO ONE OF THE MOST INVENTIVE AND SUBTLE CHARACTER ACTORS IN MOVIES TODAY.” (SCOTT) 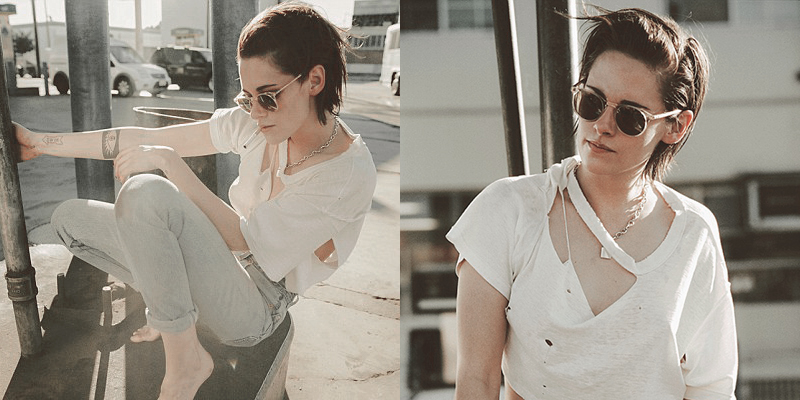