Thanks to @KStewartDailyWW & @SomeLostBliss for the translation
Les Inrockuptibles :Ghosts and fantasies After Sils Maria, Olivier Assayas reunites with Kristen Stewart for Personal Shopper, expected to come out in the spring. Report on how filming went. The weather is amazing this morning at the Bois de Boulogne. And yet, fall is upon us, but the sun shines and casts some sort of golden, crimson and rust-colored halos on the hundred-year-old trees that surround the lake in the woods. Ten joggers or so are running around at a different pace ; only a few of them slow down, intrigued by something unusual. Artifical lights swarm a small boat moored to the lakeside, about thirty women and men trot around, walkie-talkies in hand. Sat almost on the ground with a video monitor on his knees is Olivier Assayas, concentrating on the last take of his new film Personal Shopper. Short hair held back with a hairband, a leather jacket with fake fur around the collar, black tight pants, a Lacoste sweater on top of a black shirt, white sneakers, a tomboy at the last stage of deglamorization – Kristen Stewart can hardly be seen as someone who is isn’t from the crew, with whom she seems to share a close relationship. She knows them well. The team is almost identical to the one that worked on Sils Maria, Olivier’s last film, for which Kristen earned a César in February 2015. Even her bodyguard is the same, a giant german named Hannibal, who is following from the corner of his eyes, the swarm of paparazzi who are hiding behind the bushes and have been tracking the star non-stop.

The “Personal Shopper” from the title is Kristen Stewart, a young American who is living in Paris to work in the fashion industry. She has become the slave of a renowned model. A proletarian, therefore, but in a world surrounded by money, where everyone is in glamor attire. “At the beginning of the film, Olivier Assays says, there was an idea that kept running around in my head. It had been there for a while: I wanted to tell the story of a person that hated her job. She is surrounded by the most brutal material world around. So that’s why she finds solace in the abstrac and idealistic world.”

Therefore, along the film, from a fantasy thriller to a slasher movie, the characters gets deeper and deppers in a universe more and more esoteric, with ghosts and fantasies. That morning, with the small boat for a podium, a photoshoot is happening for a fashion magazine. The photographer, Benoît Peverelli plays himself, you could say, as he had already done in Sils Maria (where he was photographing Juliette Binoche for a Chanel ad) “and as a side-note, I was also sleeping with Kristen’s character” he says, joking between two takes. His character is losing his patience because the awaited model has still not arrived.

The film coordinator is played by Calypso Valois, daughter of Elli and Jacno, an electro-pop band for whom Assayas did their music videos in the 1980s. “It’s a bit weird to have Calypso as an adult in one of my films. Her mother was pregnant with her when I filmed my short in Tokyo years ago. It was never finished.” Camera. Ready. Action. Kristen Stewart runs towards Calypso Valois, apologizing profusely. Her boss didn’t wake up, maybe she’ll arrive soon. Calypson takes Kristen to the small boat lightened by fake lights, themselves under other lights for the film. The photographer, who, to kill time, is taking pictures of his assistant – a hipster with a beard and a beanie, suggests that the personal shopper should take the model’s place in the meantime. Calypso Vallois helps her onto the boat by holding her arm and there you go, the tiny, anxious, assistant ends up in the light bubble. Cut.

People running around, others switching places, stressed out bodies while a camera flows around filming everything: Even in its early stages, you can already recognize Olivier Assayas’ magic. There are takes after takes. The director is happy with the colors of the fall in the woods. And as usual, Charles Gillibert, his producer who has been present almost everyday, arrives on set. After months of dodgy dealings with no end in sight on Assayas’ project, a gangster movie with Robert Deniro & Pattinson, brutally stopped shortly before filming started, and after millions of dollars had already been invested, Gillibert is thrilled that the director bounced back so quickly, with he film he wrote in only a few weeks. Kristen Stewart walks around in circles as she concentrates.

The director of photography, Yorick Le saux tells us that in between takes, she watches short films from Youtube on her iPhone about animals. “Not stupid stuff that make you laugh. Rather, documentary images with monkeys, cats, dogs. I feel like she’s trying to understand how they move around. It’s funny because I think that there’s something inside her that is very wild, a very sharp attention to everything that’s going on around her, a feral instinct.” He also describes her particular intensity, her speed of delivery and this ability that she has “of adding human interest, and making it almost poignant, the shot of a woman opening a door, taking off her coat or looking at her phone.”

We think back to the first shots of Sils Maria, when she’s on the phone, fixing problems for Maria’s agenda, walking around in the corridor of a train. And while we have no idea what’s going on, there’s something that seizes us.

In the afternoon, the team is in front of a posh building in Paris’ XVIe arrondissement and is filming a scene where the actress runs out of the building, obviously shaken up, as she jumps on her vespa before leaving. There are almost thirty paparazzi around. Young girls, not what you would call teenagers, ex-Twilight fans, found the place where filming is taking place and are triving to come closer. A few days later, we meet with the team at Sèvres. In a coffee shop, Kristen is acting opposite the young Sigrid Bouaziz (Eden, Metamorphosis), Pascal Rambert & Audrey Bonnet. Their conversation is hushed, deep, mysterious. There’s a question about a swedish painter, Hilma Af Klint, who painted portaits and landscapes her whole life. And a few years before Malevitch, she started painting abstract things. She invented the abstract, but without anyone knowing it. She apparently got the idea by studying spiritualism.

The news influences the expression on Kristen’s face in a nuanced, contemplative way. Depending on the take, the actress has a match that she either nibbles on or that she nervously touches in her hands. She stares fixedly at things around that can’t be seen on camera.

There’s something spiritual and invisible about it. But we won’t know anything else until spring, esoteric forces that carry out in their turmoil, this troubling personal shopper.

Kristen to Attend the Hollywood Film Awards on November 14, 2014 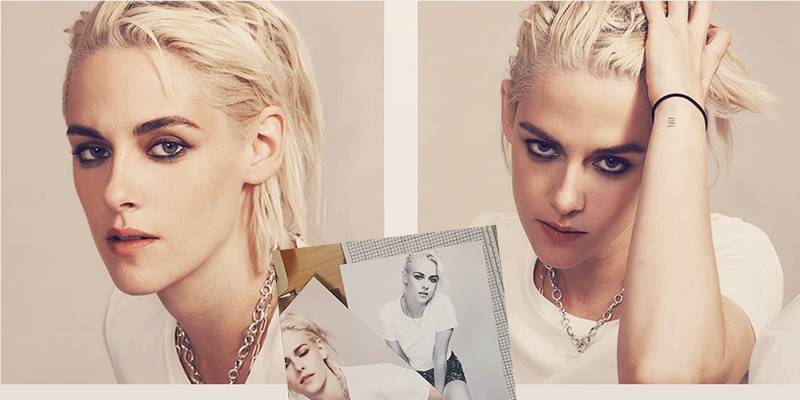