A few days before the realease of his new movie Personal Shopper, which won the director award at the Cannes Film Festival, we met with Olivier Assayas – to whom we are dedicating a passionnating and rich retrospective for a few months.

You said : “I never reasoned with female character in the center of my movies. It’s an independent move that takes me to it, I listen to my desire, to my curiosity.” You meet again with Kristen Stewart, two years after Sils Maria. Can you tell that your desire, your curiosity to film her was not completely satisfied ?
Olivier Assayas : Absolutely. I would never had said it quite like that but, in reality, it was a choice that imposed itself. I hadn’t written Sils Maria thinking of Kristen, but more of Juliette Binoche. It turns out that I was looking for an actress to play that young american assistant and it came clear really fast on Kristen – who brought something really particular to the movie. It wasn’t thought. She plays a more unidemensionnal character, she doesn’t have Maria’s complexity (Juliette Binoche’s character NDLR).

It’s true that I had a feeling to discover Kristen while filming Sils Maria, to understand what she could do, to know her inner richness, much beyond than what I could ever imagine. It creates a desires to extend this work by giving her the possibility to amplify it, to widen it. I could tell you that Personal Shopper allowed me to reach the end of what I wanted to expand and bring in her, but in the end not at all. I feel that I could very easily find her for a third film without having already revealed everything in her.

So can we expect a third fruitful collaboration between you and her?
Yes, certainly.

However, since two films, you also seem to have fun to scratch actresses a little… To make monsters of narcissism, to mock their attitude of divas… And yet the assistant is played by a huge star while celebrity Is almost absent.
Sils MariaPersonal Shopper, it’s not really an actress, it’s a star. She is famous for being famous. I hardly even represent her. She is in the “people” culture of her time. It interests me more in the fact that she is invisible. I liked the idea that Maureen (the character of Kristen Stewart) works for someone you never see. It is relatively common to work for people who are not seen in the contemporary world.

Kristen Stewart feeds the headlines people, attracting the paparazzis… Has this had an impact on the filming? Has that led to any particular difficulties? Or, on the contrary, does she find a sort of refuge on a shoot like this?
It was the pleasure of having made Sils Maria that made her want to renew the experience, with a more central role. She says so. While Sils Maria worked on the dynamics between two characters, it was interesting to be at the heart of the plot and the making of this film. She is very attached to the freedom on a shoot, something very specific that she does not necessarily find in the american cinema. Being at the heart of the creative process, in a somewhat family-friendly business. There was a continuity, a pleasure to be found again. But it was quite exhausting for her, we only filmed for about thirty days because the budget imposed it. It was challenging.

Was his popularity sometimes a hindrance to a shoot like yours?
No, but it’s a bit hard because you have to make sure the team manages to keep some fans away. I remember being annoyed because, shooting some of my scene in 360 degrees, missing a scene because we have curious people entering the field with their camera became pretty raging. What we shot in Paris was done with a very mobile camera, in a quasi-documentary style. It was really necessary to have the field as free as possible.
We shot two-thirds of the film in the Czech Republic, where it was easier to shoot outside than in Paris 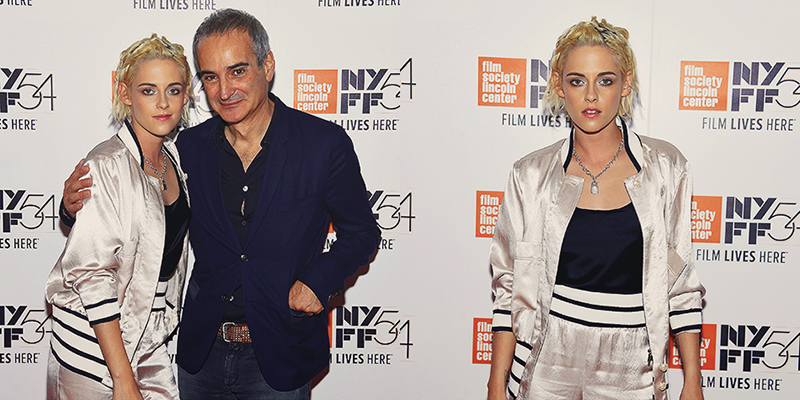