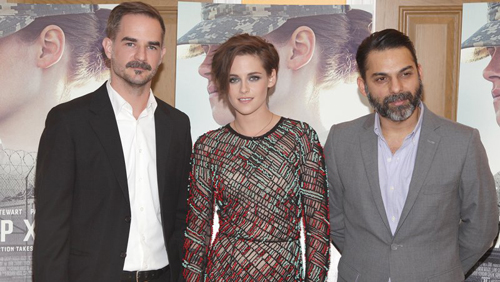 Kristen Stewart came to play a Guantanamo Bay prison guard, who forms an unlikely friendship with one of the detainees, in Camp X-Ray because she was mostly intrigued by the character’s moral dilemma.

“I really like the idea of playing a girl who we all might know from high school, who is shaped by whatever odd but incredibly normal childhood she may have had, and is somebody who wants to push a little bit harder and wants to figure out what the right thing to do is,” Stewart told The Hollywood Reporter at the film’s New York City premiere at the Crosby Street Hotel on Monday night. “[She] wants to feel dignified and honorable, and then finds that the easy answer actually doesn’t satisfy any of that.”

While Gitmo has been a highly controversial military prison since 2002, the film’s cast and writer-director Peter Sattler, who makes his feature debut with the title, don’t want to focus on the issues.

“This film is not about politics — this is about relationships, this is about humanity,” said Payman Maadi, who plays the detainee Ali. “I definitely have my opinion. I think this film is a film that makes people think about serious issues that are happening now, not only politically but human issues. Don’t think that we are different and cannot make any connection with each other. Let’s try to hear each other.”

Stewart, wearing J. Mendel, agreed on the film’s stance. “To see somebody comforted by a human relationship, it’s nice, it’s alleviating, it feels good,” she said. “You see somebody who would love to just be good, just would do anything to just be good, and then finds out that it’s not so simple, and so seeks refuge and solace and human commonality, which is what we all do every day.”

The quotidian activities of Gitmo fascinated Sattler, who noted that Wikileaks’ access to the prison’s operating manual was an invaluable resource. While Sattler stressed the apolitical and objective nature of the film, he does hope it can shed light on the situation.

“When we started making the film, people would say, ‘Oh is Gitmo still open?’ I was like, ‘Yes, still there. Twelve years and kicking. It’s still open,” said Sattler. “It doesn’t presume to give you the answer to Guantanamo Bay, but it does raise a question. We wanted to do it in an observational way to say, ‘Look, when I look at Gitmo, it looks like this to me, and I want to show you some weird little sides of it that I don’t think anyone has seen before,’ and let the audience make their own conclusion.”

“It’s a reminder, absolutely,” added Stewart. “I think Guantanamo is an immovable object. Nobody really knows what to do with it … This depicts a really objective view of what we learned about this place. It’s not offering any answers. It’s definitely asking questions. But I think it’s important to do movies about topical, relevant things. We’re not changing anything. We’re not figuring out how to deal with the world’s problems, but we’re reminding people that this one still exists.”

Camp X-Ray will be released by IFC Films on Oct. 17.

Nylon Magazine : We’ve seen her as the shy Bella Swan in Twilight and a fierce fighter in Snow White and the Huntsman, but Kristen Stewart’s latest role seriously shows off just how versatile the 24-year-old actress (and March 2009 cover girl) is. In the new Peter Sattler directed indie flick Camp X-Ray, Stewart plays a young soldier named Pvt. Amy Cole, who serves at Guantanamo Bay in the hope of doing something important with her life. Although relationships between detainees and guards are strictly prohibited, she strikes up a friendship with an empathetic, intelligent accused terrorist, played by Peyman Moaadi. The film questions ideas of freedom, guilt, and humanity in a thoughtful and procative way.

Though this certainly isn’t Stewart’s first independent film, it definitely differs from previous Hollywood blockbuster roles she’s had—and to get into the mindset of Amy Cole, she went all out, even writing poetry from her character’s perspective. Though she’s been writing poetry (or “BS” as she calls it) since middle school, this is the first time Stewart has expressly used poetry to assist with her acting. “Pointedly for this, I did write a couple things that were so spot on that I just had to share them with Pete, and it helped and felt good to share them,” she says. “But other than that, I definitely have [poetry] as a serious outlet, so if something seriously affects me, then it finds its way into stuff that I write.” And hopefully we’ll be able to get a glimpse at just what goes on in the actresses’s head—she says that she would like to eventually publish a book of her writing.

Though the movie is heavy in its subject matter and themes, Stewart sees it as something that everyone can relate to. “I love the movie because it’s so reflective of somebody that I could have gone to high school with, somebody that just wants to take away the thought and just do the right thing,” she says. “That’s not so cut and dry.” Either way, despite the unique scenario that the film places the her in, Pvt. Amy Cole is just a girl trying her best in a world where moral ambiguity runs rampant. But thanks to her dedication to the character and exploration of poetry, Kristen Stewart has got her all figured out, inner turmoil included.