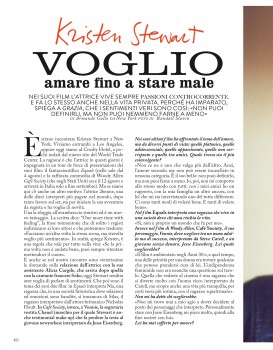 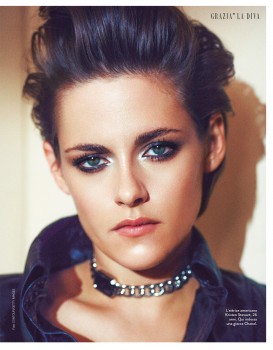 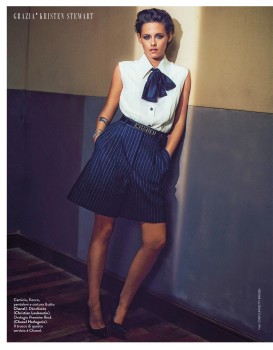 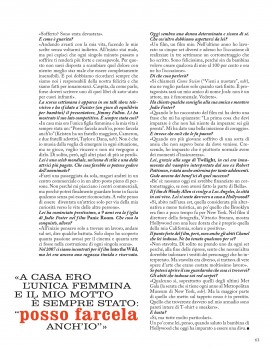 Scans thanks to KStewart Italy
Translation thanks to KStew Italy
It’s so weird to meet Kristen Stewart in New York. We both live in L.A, and today we’re at the Crosby Hotel, near the World Trade Center. The reason is that she’s so busy with the promo tour of her new movies : The sci-fi Equals & the sophisticated comedy of Woody Allen Cafe Society.

The 26 year old is one of the most paid actresses of the world, after lots of work on set , she’s starting her new adventure as a director and she desire innovation.
One of it, it’s on her forearm and it says: “one more time with feeling”, the usual quote that every director usually say to their actors and we can actually translate it into : “let’s shoot the same scene again, but now with more feeling”.
Actually, Kristen says it’s a lifestyle ”if it’s not right the first time, you can alway try again and put your heart into it.”
And even if during our meeting i can’t ask anything about her private life and the relationship she has with Alicia Cargile, after the french singer Soko, today Kristen wants to talk about feelings.
Especially because they are the centre of her two new movies : in Equals she play Nia, a girl, who lives in a futuristic society where any type of emotions are banned, she fell in love with Silas, the guy played by Nicholas Hoult.
In Café Society, she is Vonnie, a secretary wearing Chanel and Jesse Eisenberg fell in love with her.

In your recent movies you had to deal with different type of love: the platonic one, the love of a teenager, passionate love, the love between two friends and the one way love. Which is the most addictive?

K: There’s not one better than the others. You can’t define love and you can’t live without it. I act in different ways with everyone : i have a different relationship with my friend, with my family and even now i am acting different because you’re interviewing me. There’s lot of ways to love ourselves and to love other people.

In the movie Equals you play a girl who lives in a society where people who can love risk their life.

K: yeah, it’s actually not my type of world.

Instead, in Café Society by Woody Allen , your character, Vonnie, has to choose between a grown man but succesful, played by Steve Carell, and a young guy without money, Jesse Eisenberg. Who would you choose?

K: The movie is set in the 30’s, at that time, the priority for a woman was to find someone who could take care of her. The female independence wasn’t even a topic to discuss. What you will see in the theaters is a girl who have so much fun with the rich man played by Carell, but she even discover a quite life, more intimate, with the guy without money.

You didn’t tell me who would you choose.

K: I don’t feel comfortable choosing instead of the characters that i play. I personally love spending time with Jesse Eisenberg, so i will eventually end up with him.

Have you ever suffered for love?

K: Suffered? I have been devastated.

And how did you heal?

K: Moving on with my life, making my own choices without looking behind. At first you suffer but then you realize that every minute spent suffering will make you feel stronger and conscious. I woudn’t change anything about that pain : i prefer to suffer than being insensitive. And we have to remind that we are the cause of our happiness and we are made to fall in love. Damn, i should write one of those help-book for people who have a broken heart.

Last week you appeared in a Talk Show and played Twister with the conductor Jimmy Fallon. You showed your competitive side. Have you always been like this?

K: I was the only girl in my family, my life have always been like : ”i can do it too, i can do it too”. I dont actually want to emerge in every situation, but if i play, i want to win and i am not shy to say it. But usually people like you more if you just loose.

You’re a worldwide celebrity, a style icon and one of the most paid actresses. What would you do if you could enjoy being anonymous?

K: I would take a walk alone, or i will just go to a mall or a place full of people. Not because i like mall, but because i could finally get to see people’s faces without being recognized. Sometimes i think that i’ve become an actress just because of my curiosity about people’s life.

You started at a young age, you were 9 when you played jodie foster’s daughter in the movie Panic Room. What did it make you curious back then?

K: At first i was only thinking about getting a job, go to the set and have some lines to play. After i found out how much passion i had about cinema and how much art there is in making every single scene.

We met in 2007 for the movie Into The Wild, but you were still a young shy private girl. Now you’re a determinated and confident woman. What more do we have to expect from you?

What the movie is about?

K: The name is Come Swim , but i will talk about it when it’s done. The lead actor is one of my friend named Josh. He’s not an actor but he’s phenomenal. You will see.

Did you ask any advice to your friend and mentor , Jodie Foster?

K: When i told her about the movie, the first thing she said was : ”the first thing you have to learn is that you have nothing to learn. You’re ready.”
She gave me some courage.

K: When i was a kid i had anxiety and i didnt know where it came from. Growing up , i learned that it’s pretty normal to have insecurity moments.

Thanks to the Twilight saga, where you were in love with the vampire played by your ex Robert Pattinson, you have been a teenager icon. You still enjoy the benefits of it?

K: Well yeah, no one would have funded my short movie if i didn’t play Bella.

The Woody Allen’s movie is set in Los Angeles, the city where you live. Do you feel at home in Hollywood?

K: I live in the East area, the alternative one and less turistic, like Brooklyn for New York. In the movie the director of photography ,Vittorio Storaro, show an Hollywood with a golden light and it is actually the one i get to live in california, solar and positive.

The highlight of the movie are the Chanel dresses that you get to wear. Did you get get to own one of them?

K: Not this time. I usually get one from every set because, at the end of the movie, i feel like no one should wear the dresses of the characters i played. This time was different, they were pure art and they were really expensive.

If i could open your wardrobe what would i find inside? The dresses you get to wear on the red carpet?

K: One or two , yes. Especially the ones from the Met Gala. But the most of them is borrowed. In my wardrobe you would find lots of tshirts and sneakers. 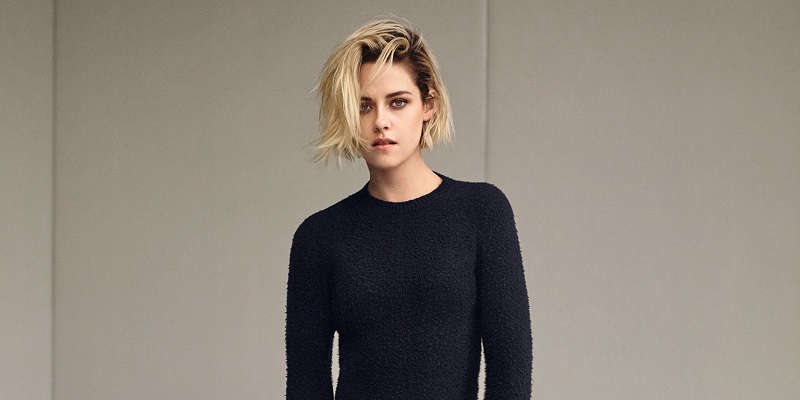