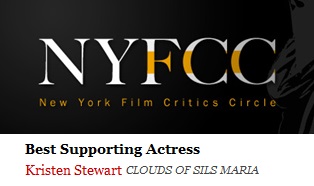 The annual Gala Awards dinner will be held on January 4, 2016 at Tao Downtown in NYC.

The Wrap : The Boston Society of Film Critics voted on the best films of 2015 on Sunday, where Tom McCarthy’s “Spotlight” cleaned up once again, and Kristen Stewart kept momentum for an historic turn in the indie “Clouds of Sils Maria.”
Stewart’s performance as the personal assistant to Juliette Binoche‘s longtime stage star won Best Supporting Actress, as it did last week with the New York Film Critics Circle. Stewart was also the first American ever to receive France’s highest acting honor, the Cesar award, for “Clouds.”

This isn’t a win per se, but she finished at the second place, so for me it’s a win XD

Kristen is #10 on the Forbes’ Top Earnings Actresses of 2014