The Hollywood Reporter : Will Eubank, who co-wrote and helmed the sci-fi thriller ‘The Signal,’ is directing.
Kristen Stewart is in negotiations to star in Underwater, a Twentieth Century Fox adventure thriller that is being produced by Chernin Entertainment.

Will Eubank, who co-wrote and helmed the sci-fi thriller The Signal, is directing.

Underwater centers on an underwater scientific crew that, after facing an earthquake, are forced to go on a dangerous journey for survival. The story has been described as an underwater Armageddon.

If a deal is made, Stewart will play the film’s lead, a jaded and hardened crew member. A March production start in New Orleans is being eyed.

The movie puts the actress, who has developed a strong résumé working on a wide range of indies since her days of toplining the Twilight movies, back into a more mainstream space.

Although Stewart has starred in such big-budget pics as Snow White and the Huntsman, it is her work in such films as Equals and Still Alice that have shown she is interested in material that is deeper and meaningful than most standard fare. Her upcoming projects include Lizzie opposite Chloe Sevigny, and she also has plans to direct another short film, this one about gun control.

Stewart is repped by Gersh.

Deadline : Kristen Stewart is in final negotiations to star in 20th Century Fox and Chernin Entertainment’s Underwater which is expected to go before the cameras next month. The film, to be directed by William Eubank, is about an underwater scientific crew who suffers a life-threatening earthquake that forces to take measures for survival.

Written by Brian Duffield with a revision by Adam Cozad (The Legend of Tarzan, Jack Ryan: Shadow Recruit), Stewart will star as Norah, a courageous and strong woman who is a bit more jaded and hardened than other crew and ends up in a relationship with another member of the crew.

Stewart, who also starred in Cafe Society and Personal Shopper, is repped by The Gersh Agency and law firm McKuin Frankel and Whitehead.

The Film Stage : One of the more visually impressive sci-fi films on the indie side the last few years was William Eubank‘s The Signal. With minuscule resources compared to his big-budget peers, he crafted a compelling tale of escalating sci-fi mystery. He’s now upping his scale for his next feature and has a major star to topline the project.

Kristen Stewart will lead his 20th Century Fox tentpole Underwater, according to THR. Described as an “underwater Armageddon,” the film, scripted by Brian Duffield, will follow the Personal Shopper actress as Nora, part of a underwater scientific crew who endure an earthquake and must fight for survival. According to Deadline, her part is of “a courageous and strong woman who is a bit more jaded and hardened than other crew and ends up in a relationship with another member of the crew.” Production is already being eyed to start this March in New Orleans, so we may see the results by 2018.

“In terms of narrative, I guess all of the usual culprits, David Lynch, [Stanley] Kubrick, all those masters of films that get in your mind,” Eubank told us, talking about his influences. “I was talking the other day, some of David Lynch’s stuff, when I was younger, I really didn’t like at all. I was like, “Ugh, this is so weird and disturbing, not something I can understand what was happening.” Then the problem is, the film sticks in your brain. You can’t get it out and then it will just be there for years and you’ll always go back to it and then I realized, one day, oh, I really do like the movie Eraserheard. It’s crazy how that can happen.”

Variety : Fox is in talks with Kristen Stewart to star in adventure-thriller “Underwater,” produced by Chernin Entertainment.

Will Eubank, who helmed the sci-fi thriller “The Signal,” is directing “Underwater.” The story focuses on an underwater scientific crew forced to go on dangerous journey for survival following an earthquake, and is described as an underwater version of Michael Bay’s “Armageddon.”

Stewart would play the lead, a jaded crew member. The studio is planning to start production in New Orleans in March.

Stewart rose to fame as the lead in the five-film “Twilight” franchise. Her credits include “Snow White and the Huntsman,” “On the Road,” “Still Alice,” “Equals,” and “Clouds of Sils Maria,” for which she won the César Award for best supporting actress, making her the first American actress to win a César. Upcoming projects include “Lizzie” opposite Chloe Sevigny.

Stewart is repped by Gersh. 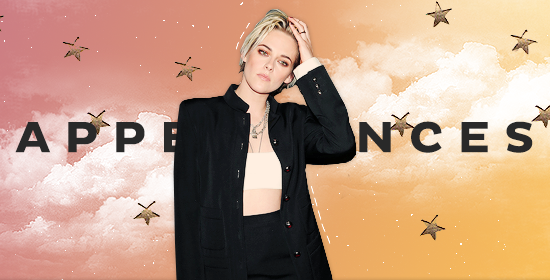