Uproxx Movies : Earlier this month, Kristen Stewart and Jesse Eisenberg made a popular Funny or Die video where the two skewer the type of interview questions that they are usually asked. And, now, here, I enter the lion’s den, so to speak (actually, it was more like a hotel conference room), trying to ask interview questions. I’ve interviewed heavyweight champion boxers before, but’s these two, together, made me feel a little overcome with anxiety.

Stewart and Eisenberg are promoting American Ultra, their second feature film together following 2009’s wonderful Adventureland (and they will both appear together next year in Woody Allen’s next film). In American Ultra, Eisenberg and Stewart play Mike and Phoebe, two pot-loving human beings who must cope with adversity after Mike discovers that he’s a secret government agent and is being hunted by bureaucrats who want him dead.

Ahead, Stewart discusses how Twilight still looms over her career, even when it comes to her award winning performances, like in Clouds of Sils Maria — and as Stewart moves on from a big franchise film, Eisenberg explains why he wants to get involved in one with Batman v Superman: Dawn of Justice. They also both talk about the nature of interviews and their general attitude toward the whole process. Additionally, Stewart shares her thoughts on an inevitable Twilight reboot.

Nothing is more uncomfortable to me than interviewing two people at the same time.

Kristen Stewart: Because we’re ganging up on you. Do you use those journalistic tricks?

I don’t have any tricks.

Stewart: Where you say something and don’t comment? Isn’t that one of the things where you ask questions, but don’t contribute anything?

Jesse Eisenberg: So, what do you mean? What would that be?

I probably interject my own opinions too much.

Eisenberg: That’s comforting, in a way.

I should take this advice.

Eisenberg: [Laughs] Yeah, you should hold your cards close to the vest.

But you two have known each other for a long time, and I’m this stranger who enters the room.

Eisenberg: Do you want to lie down?

And then you two made that video about the dumb questions you get asked.

Eisenberg: Oh, I see. But I can’t imagine you would ever do questions to her that would be offensive to her based on gender normative behavior. I’m serious, that’s not your style.

But I know that happens a lot. I call it the “If you could steal a smooch from anyone in Hollywood?” question, from Natalie Portman’s SNL Digital Short rap.

Stewart: Oh, Natalie Portman rapping! I did see that because I was blown away by her rapping.

But both of you get those type of questions.

Eisenberg: Not me. I don’t really feel like I do.

Stewart: Recently, I’ve been doing slightly more, and it really does pertain to the five-minute, overtly commercial interviews.

A video where you have to play a game or something?

Stewart: Yeah, exactly. Or if you’re doing a movie that is also very commercial – they want it quick and they don’t want anything that will make you stutter or think twice about anything. So, if you’re not good at being cute and funny in five minutes, you feel condemned. And it’s like, “My God, maybe I’m not good at that.” I acknowledge that – but why should the reaction be that I’m stupid in some way?

A couple of years ago, the headlines were that Jesse is “a jerk” because of one of those segments.

Stewart: I saw that! My friend showed me that, because they were like, “Jesse Eisenberg seems like such an asshole.” And I was like, “Why? That’s crazy. Why?” And then they showed it to me and I’m like, “He’s not a jerk.”

I spent like 90 minutes with you once for a large piece and in that time I got used to your quirks and humor. Knowing that, that video felt like you were just playing along.

Eisenberg: Yeah, you can’t control how somebody cuts something.

Stewart: She was very, I’m sorry, [looks at my recorder], I’m not speaking to that. [Kristen Stewart whispers into Jesse Eisenberg’s ear.]

When I write this up, this is the part where I insert, “Kristen Stewart whispers into Jesse Eisenberg’s ear.”

Eisenberg: [Laughs] Yeah. “[Dramatically gasps] Kristen?!?! What?!?!” But the thing is, things are so fleeting and transient. You’ll watch them for a day, then no one else remembers making them.

Stewart: And I love how people like to make statements as if they’re feigning true passion, when really they’re just using you opportunistically to get hits on their website. And I’m like, “Oh, cool, so you pretend like you care about something where you don’t have a thought – you don’t even have a fucking thought about any of it.” It’s literally just, “She said one word? Enter it. Fucking harpoon her.”

Eisenberg: With my experience, she had to have done a lot of research and printed out funny pictures. I saw it once, I don’t know if she edited it out, but she had lots of different stuff. It seems like she had plans. And it was a nice interview, I don’t know if she chose to frame it a certain way because it’s more popular that way.

With American Ultra, I’m a fan of “hidden secret skills” in movies, because it gives me hope.

Eisenberg: Like you just start speaking Portuguese or something.

Maybe I am secretly a government spy and I have a skill.

Eisenberg: There’s still hope. It’s funny about this movie because (A) they are the least likely people to have these hidden talents and secretly be fighting machines. But, also, it’s about people who would be government plots to brainwash them.

Between this and Adventureland, I enjoy watching the two of you together in movies. You’re like the new John Travolta and Olivia Newton-John. That’s a terrible comparison.

Eisenberg: Did they do other movies together?

They did Two of a Kind.

Eisenberg: Oh, they did?

It’s not very good. Again, this is a terrible comparison. But people think of them together in a nice way.

Eisenberg: Because of Grease, yeah.

Stewart: Katharine Hepburn and Spencer Tracy. I said that the other day in an interview and I felt like such a prick, “We’re like…” [laughs]

Eisenberg: Oh yeah? Tossing that off?

But we don’t see this kind of thing a lot.

Eisenberg: Yeah, it’s not by design, but it’s wonderful that it has happened.

Stewart: Yeah, when we worked together on Adventureland, I loved it. Well, it’s weird because sometimes you have to fabricate a dynamic, and we have happened to fall onto pictures that completely cater to what we already have going on. Which is really fun because the best “acting,” quote-unquote, or the most powerful, I feel, performances, or when people move you, is usually when they are just showing themselves — rather than make something, then show you. So, yeah, it’s fun. I said, like, years ago, “We need to do this all the time.”

Kristen’s recent movies — American Ultra, Camp X-Ray, and especially Clouds of Sils Maria — are very different. Do you seek that out? Or do you know what you’re looking for when you see it?

Stewart: I had read the script; it was brought to me by a producer I had worked for before…

But even more generally, what do you look for? I’m wording this poorly.

Stewart: I word everything poorly.

Stewart: I apologize for every single thing I’ve said I wish I didn’t.

Eisenberg: I apologize to the two of you.

My headline will be “Kristen Stewart And I Apologize To Each Other While Jesse Eisenberg Watches.”

Stewart: But I think somebody’s choices, if you’re any kind of creative person — whether you’re an actor, a fucking writer, an artist, anything – it kind of says a lot about you. I have total ADD. I’m not choosing projects to create any sort of library. Like, “Oh, this is going to be my legacy,” or in regards to perception. I’m really going by the gut. I think most people who are really good at what they do usually do it because they just have to. I’ve chosen really instinctively.

Perception is interesting with you, because you’ve been getting good acting reviews since Panic Room with David Fincher, through Clouds of Sils Maria, which you won an award for. But every time, people seem somehow shocked that you’re good.

Stewart: Because Twilight is so huge. Do you know what I mean? Because Twilight infiltrated everyone’s [perception]. I think if you walked into a grocery store and asked somebody if they saw Clouds of Sils Maria or Twilight, they’d probably be like, “Twilight, and she’s a terrible fucking actress.”

Eisenberg: I think if you’re in a really popular thing, it gives people license to criticize you. Not because of the thing for which they are criticizing you, which is not being good for whatever the person is doing in the thing, but just by virtue of that thing being very successful, and it’s human instinct to take down that what is successful.

Eisenberg: Any criticism of something in that is usually separate from what the criticism is.

Stewart: I also feel that anything overtly popular in the United States feels entirely owned by the public, therefore if they don’t deem it worthy, then they’re like, “We put you here. And if you do not bend over and give us absolutely everything we want, then we need to let you know.” They become vindictive. They’re like, “Excuse me…”

There was some vindictiveness toward the Twilight movies, but I also feel people have been mostly kind to Kristen for her work in recent roles.

Eisenberg: Anyone who works with Kristen or who makes movies or has an understanding of how they’re done thinks she’s one of the greatest actresses right now. People who write mean things are on the outside.

Eisenberg: Yeah. And those things, if you want to read those, you could spend your life reading them and never finish. But they’d also be very unhelpful.

And now Jesse is getting involved in a huge franchise with Batman v Superman. Why did you want to do that, knowing what you just said about how people treat popular things?

Eisenberg: Well, I mean, the thing is great.

Stewart: Big movies can be great.

But you got a taste of it with the Comic-Con controversy, which is one of the weirdest controversies I’ve seen in some time.

Eisenberg: Right. But if you let that kind of stuff govern your decisions, you’d probably never leave the house, let alone act in a thing. So, you can’t. It hurts my feelings terribly, but I guess not enough.

Speaking of big franchises, do you care if Twilight is rebooted?

Stewart: Are they saying that they have to redo them? Like, we have to do them again?

It feels just like talk right now, but everything popular eventually gets rebooted.

Stewart: Right. I was so genuinely, heavily entrenched in that, and not in a way that felt like an obligation. Even though after the first one, which stood alone, it lasted a long time. It’s hard to speak to a five-year period in a few sentences, but I loved doing it. But that doesn’t mean I want to keep doing it. But if other people? Yeah, sure. To be honest with you: I would be interested. I’d be kind of fascinated, but it wouldn’t emotionally affect me one way or the other. 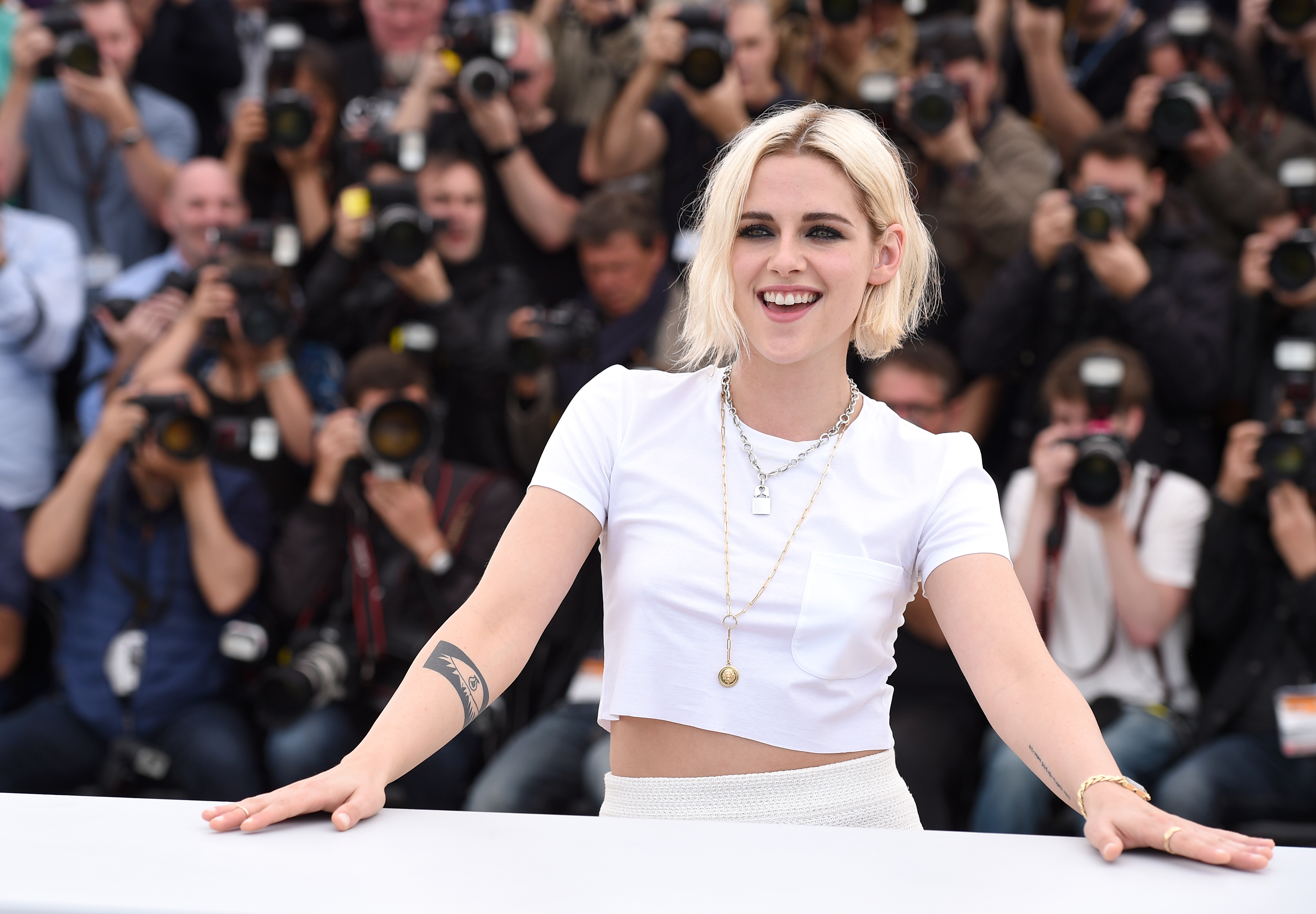