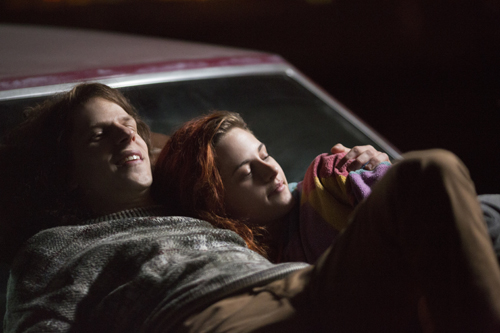 The Toronto Sun : It’s no surprise to hear Jesse Eisenberg, 31, and Kristen Stewart, 25, finish each other’s sentences. They have a lot in common.
They’re both smart. They’re both articulate. They both seem unlikely to suffer fools gladly.
The actors star together in the blackly comic movie American Ultra, a contemporary yarn opening Friday about stoners who become action heroes. Eisenberg and Stewart also starred in Adventureland together in 2009; they’ll be a team again for an upcoming Woody Allen movie.

Do they actually like each other?
“Just enough,” snarks Eisenberg, and they both laugh.

“Yeah we do, very much,” he continues. “Kristen is one of the best. She’s a wonderful person and a phenomenal actress.”

American Ultra finds the duo playing laid-back residents of small-town, West Virginia. They’re a couple in love, but they don’t have much else going on. Eisenberg’s character, Mike, suffers from panic attacks that limit his activities. Mostly, he smokes dope and works at a local convenience store. Stewart’s character, Phoebe, is loving and supportive of Mike, but she’s likewise a massive underachiever.
When it turns out that Mike is actually an experimental government agent capable of genius thinking and great physical prowess, no one is more surprised than he. American Ultra marks Eisenberg’s debut as an action hero. Sort of.

“To me, the best possible distraction for an actor is to have something physical to do, because it immediately takes you out of your head,” he says. “You can’t second guess yourself or doubt anything, and it’s the best way to invest in your character. So the physical stuff I had to do in this movie was a great help.” On her side, Stewart (also present for this phone interview) says she took on American Ultra looking for a bit of fun.

“I had just done a ton of heavy stuff,” she says, “and I just wanted something a little lighter. When I got there it was just the opposite — it was as hard as any job I’ve done!”

Eisenberg and Stewart have another thing in common — they both started acting in childhood. Eisenberg went with his little sister to children’s theatre, where she was enrolled to help her overcome shyness, and he was drawn to performing. He made his film debut at 18, in a movie called Roger Dodger (2002). Eisenberg has some excellent movies on his CV — The Squid and The Whale, Holy Rollers, Zombieland — and when he starred in The Social Network (2010) as Facebook creator Mark Zuckerberg, he won Oscar and Golden Globe nominations. And he became a star.

His other films include To Rome with Love, the animated Rio, Now You See Me and The Double; he can be seen this year in The End of The Tour and Louder Than Bombs. The latter will be screened at TIFF.
Eisenberg is also a playwright, having made his off-Broadway debut in 2011 with Asuncion; his other plays are The Revisionist and The Spoils. His collection of short stories, Bream Gives Me Hiccups, will be published in the fall.

Fans are looking forward to Eisenberg’s portrayal of villain Lex Luthor in the upcoming Batman v Superman: Dawn of Justice movie, knowing he will give the character depth. Eisenberg recently had a taste of the level of fan interest that comes with such a role when he attended Comic-Con. It was not an entirely pleasant experience.

As he explained, “Even if they’re saying nice things, just being shouted at by thousands of people, it’s horrifying.” The actor has been photographed a few times with his girlfriend, actress Mia Wasikowska (Alice in Wonderland), but otherwise he seems adept at keeping his private life private. Will Batman v Superman change that?

“Maybe some days are difficult, like those big media days,” he acknowledges, “but otherwise, life is normal, I guess. Seems kind of normal.”

The sort of attention celebrities are subjected to, says Eisenberg, is thus far outside his personal experience. “And I don’t have scrutiny like that.” He adds, amiably, “Maybe Kristen does.”

Indeed she does. Kristen Stewart’s role in the Twilight movies (and her real-life relationship with co-star Robert Pattinson) put her in the full glare of the spotlight, ensuring her every move, personal or professional, would be well-documented.

The actress was eight years old and singing in a school play when she was spotted by a talent scout, and that’s essentially when her career began. Stewart drew notice as an adolescent in The Safety of Objects in 2001 and Panic Room in 2002, and went on to distinguish herself in several movies — Cold Creek Manor, The Cake Eaters and Into the Wild among them — before the Twilight franchise made her famous.

“There’s an interesting growth pattern,” she says of her work, “because when I first acknowledged my desire to work on film, it wasn’t with the goal to be a performer.” Stewart just wanted to be on set because both her parents worked in film and TV.

“And I thought what they did was really cool. And then I turned 13 and woke up and realized — and I was a working actress — how much I loved it. Right now I feel I’m very lucky, because I chose to do this as a nine-year-old, and it was absolutely my choice, and I don’t think I would have had the capacity to make that choice as an insecure teenager or as an adult who thought that was an unreasonable expectation of life.”

Stewart obviously loves what she does. “I just get so much out of it. It’s so creatively indulgent,” she says. “Anyone who chooses the arts as a setting for your life — it’s bold as hell! I feel really lucky I decided as a nine-year-old, because now I’m reaping the benefits.”

Speaking of bold as hell, she was only 17 years old when she made the first Twilight movie. Did Stewart realize what would happen with the movie version of a book that popular?

“Actually, I read the script for Twilight when Jesse and I were on Adventureland,” says Stewart, “And I didn’t realize anything. Quite the opposite.” Stewart thought she and director Catherine Hardwicke would be making a smallish movie.

“I thought we could just do whatever we wanted, and we would never make a sequel, and the book was a jumping point and then we could kind of explore this realm, and move on. And then, all of a sudden, it turned into something … It absolutely happened overnight.”

And nobody was prepared for what happened.

“It was a huge shock to the system,” says Stewart. “Not just speaking personally. The whole production and every actor involved was hit with this like a ton of bricks.”

Stewart continues to seek out material with an edge in films such as The Runaways, Welcome to the Rileys, On the Road and Clouds of Sils Maria. If she’s had to give up a measure of spontaneity to survive the exigencies of fame, so be it.

“Honestly, if you’re going to focus on what you lose, rather than what you gain in a position like this — and I don’t mean monetary gain — I’m given so much happiness and stimulation by what I do,” she says. “It would be silly to focus on the fact I can’t go to malls anymore.
“I’d rather focus on the fact I’m working with incredibly intelligent, driven people who I just want to be around.”