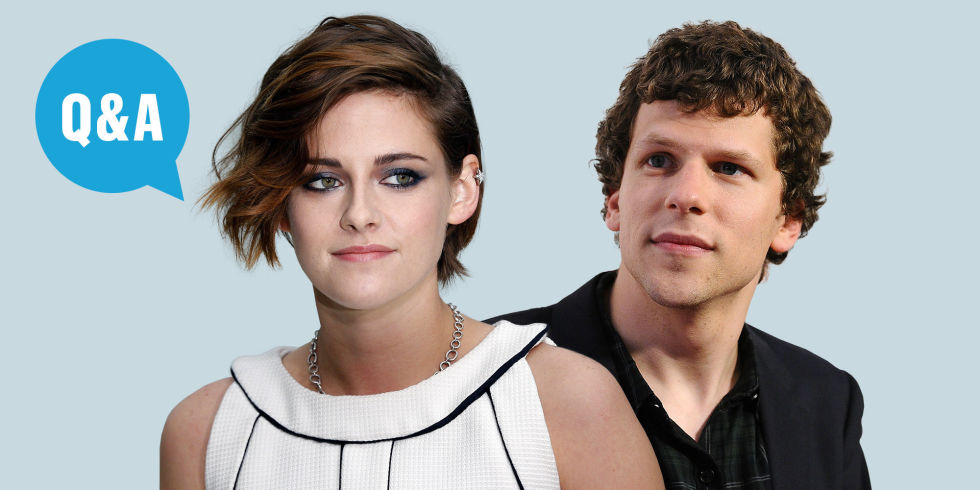 Esquire : The genre-meshing American Ultra can’t squeeze into a logline. What starts as a stoner love story explodes into a Bourne-esque spy saga before gracefully decompressing into something unexpectedly intimate. There are wandering conversations set against starscapes and weed smoke, there are black ops assaults in sporting goods stores, there are emotional confessions, there are knife fights, there’s slapstick humor, there’s Justified actor Walton Goggins lighting cars on fire with psychotic hubris. But American Ultra, in theaters Friday, always comes back to its leads, Jesse Eisenberg as the absent-minded Mike whose super-soldier genetics are “activated” by the FBI, and Kristen Stewart’s Phoebe, the love of his life who doesn’t take government intrusion lightly. With marijuana, unexpected firearm skills, and a bevy of eccentricities, the couple navigates the film’s twisted scenario. Which had us wondering: Do Stewart and Eisenberg share anything in common with two pot-smoking , gut-toting, confused-as-hell heroes? Talking to the two actors during a recent press stop in New York City, we ran down the checklist:

Stewart: Once, much to my chagrin. I was with a couple of friends, one who goes to a gun range in Los Angeles—which I really thought that was crazy. But I went. You can walk in and say—and I’ve never handled a gun, right?—”Give me that one.” Even if [it’s too big] to hold it. Guns make me really uncomfortable. Even in the movie. I took it so seriously because I wanted to respect it. Respect its power. People get weird around them, too. Either people get super-excited and like adrenaline-pumped or people are the type to step back. And I’m definitely the type to step back.

Eisenberg: Me, too. But luckily our characters are pacifists. We’re skittish, they’re skittish. Perfect match.

Eisenberg: We had these great artists come on set and I would have to draw the last line of something to make it look like I was drawing the whole thing and it was like, without exception, my last line ruined the drawing. Even if it was like an inch long. How could I possibly ruin it? But I fucked it up with one extra squiggle over the monkey’s ear. Somehow I ruined the thing.

And like Stewart’s Phoebe, they see a woman sacrificing in the name of love as an admirable quality: True.

Stewart: It’s really cool to see somebody accept compromise so willingly because of a selfless human connection. Which ultimately is selfish, because that’s what you want. But it’s just lovely to see someone give something up. It’s why I wanted to do Twilight. Literally. That’s why I thought it was so silly when people would be like, “So how do you feel about playing such a weak character that’s so subject to the male counterpart?” And I’m like, “She’s practicing free will.” I think it’s so courageous and cool, especially considering she worked so hard to get to where she was and she probably, through him, learned more about herself, which is that she disagrees with that lifestyle and prefers to live with him. It’s also cool to see someone make a change in life, a drastic change. Usually people get comfortable and kind of carry on. These kids are cool. I admire Mike and Phoebe.

Eiseneberg: Her character, you realize, is the strongest character in the movie. She kind of plays various levels of vulnerability and you realize it’s for an effect.

Stewart: I actually did that. I accidentally did that. It’s the second time it’s happened to me. [Topher] had a cartoon lump that raised on his forehead as he stood in front of me. I was like, “Oh, God.” But he was fine. I’m quite small.

Walton Goggins, who reaches peak craziness in American Ultra, is as wild in real life as he appears to be: True-ish.

Their jobs have “activated” skills hidden inside of them: True.

Eisenberg: Only from acting did I realize I have a lot of dormant anger. And then you’re asked to portray it in a fictional setting

Stewart: And it just comes out so hard!

Eisenberg: You realize, I must have had this somewhere. You can perform it, but it actually felt cathartic in some way.

Stewart: Honestly I think that—and people could run with this, coming out of my mouth, for sure—but I think [anger] is the easiest emotion to access, for whatever reason. I think by nature of raising your voice, it’s a physical, sense memory trigger. I don’t think you’re alone there.

Eisenberg: I just don’t want to live in a world where everyone has this quick-trigger anger.

Stewart: That’s what freaks me out, too. People always say, “You play angry so well.” But I don’t know why, I’m not an angry person!

Eisenberg: I’ve had… illegal paranoid experiences irrespective to what I’ve done prior to the experience.

Eisenberg: How much time do we have? I’m always paranoid. There’s this Woody Allen line, he says something along the lines of, “Nine out of ten times the paranoid person’s right.” Something like that.

Stewart: I think I overthink interactions. I think I’m a little socially paranoid. I think I will definitely sit in a restaurant and be like, “Everyone is staring at me,” when they’re fucking not. I’m totally paranoid about that. But it’s weird to be paranoid about something that’s so consistently true and when it’s not, you feel like an idiot, like an absolute crazy person.