Distraught text: “Kristen has missed her flight, Interview postponed.”
Desperate text: “Kristen has arrived, but there’s a Chanel diner at the time of the photoshoot, everything is cancelled.”
Worried text: “Kristen and Juliette’s taxis just crossed paths, let’s pray they’re going to the same place.”
Encouraging text: “Beginning of the photoshoot! Terrible amount of stress. Will Kristen be able to stay?”
Nocturnal text discovered the morning after: “The pictures are sublime!”
Last text: “You have thirty minutes. Kristen is going back to the US right after the interview.”

Therefore, it’s early in the morning with some kind of apprehension – Will we manage to say at least three words in less than thirty minutes? – that we head to the hotel to meet with Juliette Binoche and Kristen Stewart, for the release of Olivier Assayas’ most beautiful film, “Sils Maria”. The director offers to Juliette Binoche, a complex and cruel character that she embraces with open arms: the role of a star faced with other people’s judgment and the process of aging, the discovery that she could be forgotten and more importantly, a radical loneliness. A role very far from Juliette Binoche, who proves, by reviving the most beautiful characters, that time is her ally, Olivier Assayas, yet, says that he tried to be as close to her as possible to bring to life the star Maria Enders and that he tried to play with a common biographical element. The director and the actress made their first steps together in the same film, thirty years ago: “Rendez-vous”, by André Téchiné. Assayas had co-written the script, and the film had given him an insight that had launched him on the path of director. As for Juliette Binoche, it was an explosion. Suddenly one day, the unknown woman, with the beautiful smile was propelled into another galaxy.

Like every star, the character of Maria Enders has someone by her side: her assistant, a young, bubbly woman, nervous, efficient, tomboy-ish, with glasses, who texts and googles constantly, and who makes decisions on behalf of her boss. It’s Kristen Stewart, discovered worldwide in the “Twilight” saga, who plays this role. At the top of her popularity if we believe the comments: “Wow, lucky you! You don’t miss an interview with Kristen Stewart. She is really different.” is repeated to us everywhere. We see from afar, the girl who almost couldn’t make it, alone, in the corridor, without her various PR team and bodyguard. (Who forgot to wake her up), short two-colored hair, low-waisted jeans and a white shirt, sleepy smoky eyes from the photoshoot of the night before. And, right away, a freedom of speech that clashes, a reminder of a young Madonna, and shatters the thousand barriers that made us believe we were having a meeting with Obama himself.

ELLE: Juliette, in what way does the character of Maria reminds you of who you are?
JULIETTE BINOCHE: It’s not so much the character but the situation: Two actresses that are not from the same generation, an assistant. So, yeah, there’s an echo. The film shows a woman in danger, terribly vulnerable, who doesn’t know who she is or where she is. A fragility that we can all feel, if we’re being sent on the other side of the planet for no reason, without being able to control anything or to decide for yourself. When you travel that much, you don’t know where you live anymore! You make yourself available to mouvement, to incessant requests from everyone, and in this whirlwind, Maria Enders has an anchor: Her assistant. The character played by Kristen allows her to have some kind of family and gives her a mirror. At least her assistant is looking at her, gives her back that image of a more glorious time. Even better, she’s an intermediary between herself and the rest of the world. In fact, Maria Enders finds herself in total dependance of Valentine, who is young, who has an active sex life – unlike her – who knows how to make decisions and pushes her to make her own.

ELLE: Kristen, we have the feeling that you had a lot of fun when you constructed this character who takes over and looks over the star.. This assistant, is she familiar to you or is she foreign?
KRISTEN STEWART: There’s no foreign character. Each role comes from within yourself and your own personal experience, but the assistant even more so than the others. I know this world so well… This dynamic fusion that can explode in the air! I’ve come across those kind of relationship, and I know what it’s like for a star to be isolated and to borrow an assistant as a friend like you would a car. It’s very complicated, the lines gets blurred, everything gets mixed up, work, friendship, love, when you need the other to remind yourself of who you are. The assistant becomes the owner of all of your secrets, the one who knows the most intimate parts of your life. The film is the confrontation between two women at different stages of their lives. One is at the point where the price she has to pay for her art destabilizes her completely. Even if it’s worth it.
JULIETTE: Among the thousand of reasons why I chose to do this film, there is this one: “Sils maria” finally shows what it costs an actor to play a role. It’s not that frequent in cinema. How it marks you. The hesitations and the back and forth between agreement and refusal, those are not whims, but reasons of life and death, even if it can seem excessive for someone from the outside. To act, you sometime have to move mountains, get close to some kind of vulnerability and the fears you usually try to avoid. We’re all built on fragile bases and, when you act, you go down very deep within yourself. The loss of all your landmarks make you humble. It hurts and it’s very physical, the body has to adapt itself. Not forgetting that, when you’re an actress, you’re looked at through a magnifying glass. When you reach a certain age, all the transformations of your body and face are perceived. Until you reach the point where you stop caring. When you stop trying to be perfect.

ELLE: “Sils Maria” is also a film about fame. Today, stars are always followed by paparazzi and every action is discussed. Juliette, Kristen, is this a familliar situation for you or not?
JULIETTE: (Laughs) I have no idea what you’re talking about. Do you know anything about that, Kristen?
KRISTEN: Websites create fictions that are being consummed and renewed every minute. It’s crazy! I really don’t understand in what way it is interesting or funny to read false things about people you don’t even know. Well, yeah, I understand that it’s a business and that people earn a lot of money because of it. Stars are turned into products that you can sell online. I’m not saying that we should all go back to the Middle Ages, you find awesome things online. But Jesus, it would be so great if there was a way to stop all these inventions that you feed the readers like gooses, just for dough. I don’t even think that the readers themselves enjoy being treated like farmyard animals.

ELLE: What makes it possible for you to escape it?
KRISTEN: What’s being shown in the film: Go outside, get some fresh air, walk in the mountains…

ELLE: Is it the same thing to be an actress in Europe and in the US?
KRISTEN: I don’t think the way we work depends on where we come from. We’re both very different, like two people can be. But we work for the same reasons.
JULIETTE: On the other hand, American directors don’t work like our European or Asian colleagues. Kristen you really think that a European shoot works the same way as one for an American blockbuster? Olivier is very influences by Asian directors. I’ve thought a lot about “Voyage du ballon rouge” by Hou Hsiao-hsien when shooting the film. He improvises a lot, can leave us with no text, we don’t rehearse…
KRISTEN: And we only realize afterwards that he tricked us so we could move forward. We tell him: “Look, I found this rock, it’s awesome!”. In reality, just like “Little Thumbling”, he is the one who scattered it.

ELLE: Kristen, you’ve said in the past that your parents pushed you to become an actress, because as a kid, you were hyperactive with ADD. Is it true?
KRISTEN: Bullshit! Did you read that on a Wikipedia page? On the contrary, I was very calm as a kid. I grew up on sets and I used to idealize my parents. My mother was a screenwriter and my father was an assistant director at Fox. My parents tried everything to stop me from working in this world. At 8, I couldn’t be a decorator or a chief cameraman, but an actress, yes! At 13, I had an epiphany. I realized what giving life to a character meant. Immediately, I became the most pretentious in my class. For me, it was like jumping into an empty space. I fully get that this kind of sentiment can be seen as ridiculous.. And yet, that’s what I feel.

ELLE: What did you discover by working with each other?
KRISTEN: Juliette reveals to others their own talent. It’s disarming. You can’t fake it with her. You can’t lie to her. This sincerity is the most beautiful gift that you can give to another actor. More than anyone else, she made me think.
JULIETTE: Kristen is not afraid of her grey areas. During every take, she’s like an animal on the look-out that wants to know what’s hidden behind the door. She barely needs any time to remember her lines and she throws herself with confidence into the scene. It’s paradoxical: It’s like she’s hanging from the summit of a hill, and is totally at ease. And Kristen writes poetry.

ELLE: Is it true?
KRISTEN: Yes. In fact, I think we should all do a collective reading to finish the interview! Juliette had an extraordinary assistant on set. One morning, right before the shoot, all three of us, we acted crazy in the Alpes. We were dancing like cats, we were singing. Ten minutes before hearing “Action!”, we had a blast. 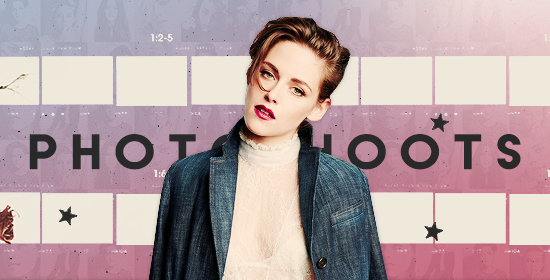 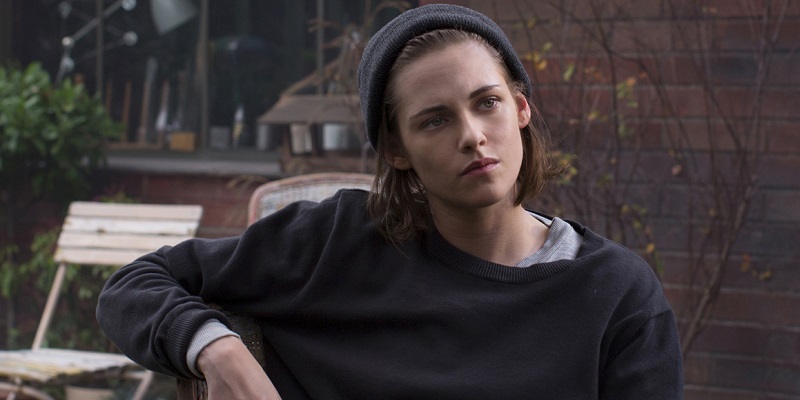