The Chanel Métiers D’Art Campaign is here ! Here are the first pictures thanks to kstewartfans, plus an new interview.

: WWD: PARIS — “Karl never turns me into something I’m not. But like all good directors, he is capable of bringing qualities out of people that are sometimes not as obvious to them.”

So says Kristen Stewart, who smolders like some Italian movie star of yore in Chanel’s campaign for its “Paris in Rome” Métiers d’Art collection, lensed by Karl Lagerfeld, one of her most enthusiastic champions.

“She is a real personality. I don’t compare her to any other actress and she is really modern, whatever that means,” Lagerfeld said in an exclusive interview. “And I think that she is perfect for the Chanel image of today.”

Slated to make their debut in June magazines, the ads mark the latest collaboration between the American actress and the German couturier, telegraphing their mutual affection.

“Karl directs photo shoots and always provides an environment for a story to unfold. And the way that occurs is very natural. But always under his guidance, which is felt and inspiring,” Stewart told WWD. “It’s never labor intensive because that is against the nature of spontaneous art.”

Still, Lagerfeld left nothing to chance for the backdrop, bringing in his own Art Deco furniture by Louis Süe and André Mare, co-founders of the Compagnie des arts français, to decorate the location, a large Parisian apartment.

“She is an actress and she is very actress-like, which I love,” Lagerfeld said about Stewart as he flicked through images on his iPad Pro. “This a photo of an actress of a period which does not exist any longer, the kind of movies they don’t make anymore and [Kristen] got it naturally. We did it in one evening.”

“It went very smoothly,” he continued. “She knows us, she knows my whole team so that makes a big difference. For me, working with people I really know is no problem: There is no questioning; there is no drama. We are used to each other so things come naturally.”

“The hair gives an idea of the period,” the designer said, hastening to add: “This is not a retro collection. It can be a kind of evocation in the air, but it should stay there.”

Lagerfeld cottoned onto Stewart early in her career, captivated by her beauty, talent — and moxie. He cast her as a young Gabrielle “Coco” Chanel for an 11-minute film he screened in tandem with the unveiling of the Paris in Rome collection, paraded in studio No. 5, naturally.

In it, Stewart portrays a fiery young actress brought in to portray the legendary designer in a biopic — only to lock horns with practically everyone on the set, exploding with anger and expletives.

“I like the whole package. I like her expression, I like the toughness of the attitude, everything,” Lagerfeld said. “She is a really good actress. I like tough women who can scream, who can be mean. For men, I hate that; for women, I love it.”

The actress’ screen credits include “Panic Room,” “Into the Wild,” the “Twilight” series and “On the Road.” She will be seen next in Woody Allen’s “Café Society,” being screened on the opening night of the Cannes Film Festival next month, as well as “Personal Shopper,” directed by Olivier Assayas, and “Billy Lynn’s Long Halftime Walk,” directed by Ang Lee.

For Chanel, Stewart was the face for another Metiers d’Art campaign, showcasing the Paris-Dallas collection in 2013. She has also appeared in Chanel campaigns for eyewear, the 11.12 handbag collection and for an eye makeup line, the latter photographed by Mario Testino.

Yet Stewart ranks the Paris in Rome shoot as the best yet.

“Wearing the clothes from the show was my favorite experience yet working on campaign shoots with Chanel. The set was so complete and transportive. The clothes within that environment came to life,” she said. “I loved the show; it blew me away. Truly one of my favorite collections yet and I’m so, so happy to be in them and find their stories.”

The Métiers d’Art collection, introduced by Lagerfeld in 2002 as a way to exalt the specialty couture ateliers Chanel owns, ignited the pre-fall frenzy and has become one of the brand’s most important deliveries, backed since 2009 by dedicated advertising campaigns. 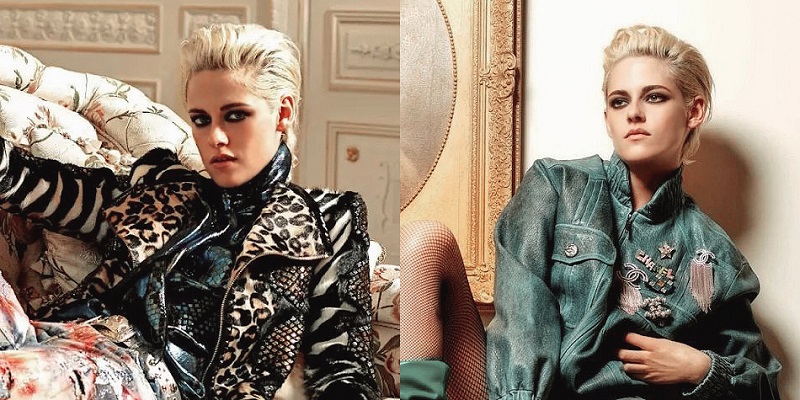