The Criterion Collection is a continuing series of important classic and contemporary films on home video. Our editions often feature restored film transfers, commentary tracks, and other supplemental features. Criterion has been working closely with filmmakers and scholars to ensure that each film is presented as its maker would want it seen and published in an edition that will deepen the viewer’s understanding and appreciation of the art of cinema.

New 2K digital master, with 5.1 surround DTS-HD Master Audio soundtrack on the Blu-ray
New interviews with director Olivier Assayas and actors Juliette Binoche and Kristen Stewart
Cloud Phenomena of Maloja, a silent 1924 documentary by Arnold Fanck that is seen in the film
Trailer
PLUS: An essay by critic Molly Haskell
New cover by Nessim Higson

END_OF_DOCUMENT_TOKEN_TO_BE_REPLACED

Kristen was one of the many guests at the Film Society of Lincoln Center’s luncheon at Scarpetta in New York on January 5th, 2016. She was wearing head to toe @CHANEL from the Spring’16 collection + Pre-Fall’16 heels. Pictures thanks to kristenstewartbr.com.br and the fans who were kind enough to share.

Kristen was one of the honorees at the New York Film Critics Circle annual Gala Awards at the Tao Downtown restaurant in New York on January 4th, 2016. She was wearing head to toe @CHANEL from the Pre-Fall 2015/2016 Métiers des Arts collection, from which she is the face of the brand.

Julianne presenting her award: “Well, listen, you know, I’m happy to have the opportunity to talk about Kristen. I always like to mention that I have known her since she was 12 years old. You know, this is a way to state my primacy as an actor, and my own importance. Like you say, “Oh, yeah, I’ve known Kristen since she was 18,” and I’m like, “Yeah? Yeah? I’ve known her since she was 12.” But it’s also a way to give me a frame to talk about her tremendous abilities and how obvious they were, so very early on. My husband, Bart Freundlich, cast a 12-year-old Kristen in his film [Catch That Kid] and would come home every day, telling me how amazing this little kid was and how she was going to be a giant star. No kidding, that’s what he’d say. And then he’d show me the dailies so I could see for myself, the emotions that she had at her fingertips, and her inability to be anything less than completely authentic and alive onscreen.

And this authenticity extends to her personal self as well. Kristen brings an intensity and a truthfulness to absolutely everything in her life, her work, her friendships, and her relationship with the world. She has managed to become a global star while remaining very much herself, with her talent intact. And I’ve been very, very close to that talent, and that’s when you can tell whether or not somebody’s faking it or not, and believe me, she’s not. I’ve seen her skin flush with emotion; I’ve wiped tears off her face and experienced the sheer pleasure of connecting with her as an actor, all the while knowing that that’s the connection everyone in the audience is feeling as well. In Clouds of Sils Maria, the movie she’s being honored for tonight, Kristen is achingly alive, palpably emotional, utterly practical, totally normal, and incandescent onscreen. In short, she is nothing less than what I expected of her when she was 12 years old. She is my friend, and I love her, and I thank you for acknowledging this beautiful performance.”

Kristen: “Hey, guys … That was very sweet, thank you, Julie. Um, it means a lot to receive this from you [the NYFCC]. I’ve received a lot of popcorn, MTV Popcorns [at the MTV Movie Awards], stuff like that, but this is a little different. No, really. Thanks. Uh, this movie, it’s really lovely. I worked with this director, Olivier Assayas directed this. Charles Gillibert produced On the Road, which I did a couple years ago, and got involved with us, and he’s just put me in contact with people who I should be spending my time with, really incredible vision and that’s what I love him for … This movie is really thoughtful and quiet and kind of diagonal and not extreme in any way. And it came out like a year ago! So this is nuts. And thank you so much, it really means a lot, and our crew was incredible, and when you get the right people together who want to tell a story, good things happen. Thank you so much. Bye.”

END_OF_DOCUMENT_TOKEN_TO_BE_REPLACED

Our lovely girl was yesterday’s guest of honor at the screenning of #CloudsofSilsMaria at the IFC Center in New York on January 3rd, 2016. She was wearing white @AteaOceanie suit, @LouboutinWorld heels and a @CHANEL première chain watch in yellow gold and diamond. I wish to thank our amazing fandom for providing for the gorgeous fanpics of Kristen.

The Hollywood Reporter : You can download the podcast HERE or check the source, or you can read it below.

The 25-year-old, who became the first American actress ever to win a Cesar Award and won several critics groups’ awards for her portrayal of a movie star’s assistant, reflects on celeb obsession—on screen and off—and offers advice to Daisy Ridley.
“As somebody who’s dealt with the more absurd, really surreal, oftentimes insanely superficial, empty circus of what the media can be — and perception versus reality — I thought it was really funny and appropriate for me to play that part,” says the actress Kristen Stewart of the one for which she currently is receiving accolades left and right — Val, an assistant to a movie star in the celeb-obsessed world of Olivier Assayas’ dark comedy Clouds of Sils Maria — as we sit down to record an episode of the ‘Awards Chatter’ podcast. “There was just nobody who could say those things with more knowing, and people know that,” she continues with a laugh. “I wanted those words in my mouth.”

END_OF_DOCUMENT_TOKEN_TO_BE_REPLACED 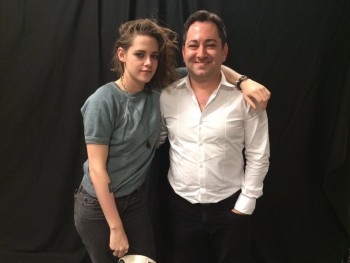 This photo was taken on 23 December when the podcast was recorded.

‘Awards Chatter’ is a weekly podcast, moderated by THR awards analyst Scott Feinberg, featuring musings about the Oscar, Emmy and Tony races, as well as in-depth interviews with top contenders for those prizes.

The interview will be live on Scott Feinberg’s iTunes podcast HERE on Monday 28 December.

LA Times : When historians look back at this decade of moviemaking their first instinct may be to crown Alejandro Iñárritu’s “Birdman” as the definitive statement on the culture of celebrity of this era. If they are smart, they’ll present another film that is arguably more spot on in how it portrays the movie industry’s inherent narcissism: Olivier Assayas’ “Clouds of Sils Maria.” Critics have been simmering on the drama since it debuted at the 2014 Cannes Film Festival and surprised many by remembering to shower one of its stars, Kristen Stewart, with honors over the past month.
On one Sunday this month, Stewart won the supporting actress prize from both the New York Film Critics Circle and the Boston Society of Film Critics. A few days later, she was the official runner-up for the same honor from the Los Angeles Film Critics Assn. These were unforeseen kudos even when you consider that Stewart became the first American woman to win a César Award, France’s equivalent of the Academy Award, for her performance in “Clouds” in February. Because it was released in the United States this calendar year, Assayas’ drama was eligible for most critic honors this awards season, but Stewart says she wasn’t expecting any of the adoration she’s receiving.

END_OF_DOCUMENT_TOKEN_TO_BE_REPLACED

At the peak of her international career, Maria Enders (Juliette Binoche) is asked to perform in a revival of the play that made her famous twenty years ago. But back then she played the role of Sigrid, an alluring young girl who disarms and eventually drives her boss Helena to suicide. Now she is being asked to step into the other role, that of the older Helena. She departs with her assistant (Kristen Stewart) to rehearse in Sils Maria; a remote region of the Alps. A young Hollywood starlet with a penchant for scandal (Chloë Grace Moretz) is to take on the role of Sigrid, and Maria finds herself on the other side of the mirror, face to face with an ambiguously charming woman who is, in essence, an unsettling reflection of herself.