The Daily Beast : The acclaimed actress sat down with Marlow Stern to discuss her new sci-fi film ‘Equals,’ Kim Davis, and the importance of giving in to emotion.

“Not only is she really beautiful, but she’s so vulnerable,” says filmmaker Drake Doremus. “You just love watching her. There is a lot going on under the surface.”

The director is gushing over the myriad talents of his star, Kristen Stewart, who not only holds a close-up better than just about any other actress, but, due to the aforementioned emotional reservoir, possesses the uncanny ability to convey more with a nod or shrug than most can with a 5-page monologue. And take it from Doremus—the man knows a thing or two about talented actresses, having presided over a couple of then up-and-coming gals by the names of Felicity Jones and Jennifer Lawrence in his sophomore feature Like Crazy.

Doremus’s latest is Equals, which made its North American premiere at the Toronto International Film Festival. In it, Stewart plays Nia, a young woman in a harmonious future society dubbed “The Collective” where everyone stalks about in white Nehru suits, and emotions have been all but eradicated. Those who show emotions are dubbed “Defects,” and sent to the infirmary to be killed. When her coworker Silas (Nicholas Hoult) falls in love with Nia, the two are forced to go on the run or face termination.

END_OF_DOCUMENT_TOKEN_TO_BE_REPLACED

The Hollywood Reporter : The star of the edgy new sci fi title ‘Equals’ discusses the challenges of fame, life after Bella and why she will unfriend you.

In Drake Doremus’ future set love story Equals, all emotions have been suppressed, replaced by an intellectual curiosity that make for one very efficient workforce. Kristen Stewart and Nicholas Hoult play two people inflicted with SOS, Switched On Syndrome, that allows them to slowly begin to feel their feelings.

Surrounded by a population of subordinates, the two fall in love an intensity that makes it feel like they are the last two people on earth. Stewart, who has managed to hide her “sickness” publicly, tries to suppress her feelings, knowing that if found out, the two will be sent to a rehabilitation center that ends in suicide or death. The film takes a Shakespearean twist that makes us think that the future might not be so bleak after all.

The Hollywood Reporter caught up with Stewart to discuss the real-life training she had for turning off her emotions and how her first love was all too close to the role. Equals premieres in Toronto Sept. 13, with worldwide sales handled by Mister Smith Entertainment.

END_OF_DOCUMENT_TOKEN_TO_BE_REPLACED

I’ve added 907 new HQ pictures of Kristen attending the #Equals World Premiere at the Venice Film Festival in Venice on September 5th, 2015. She was wearing a Chanel dress and Louboutin shoes. Pictures courtesy of kstewartfans.

END_OF_DOCUMENT_TOKEN_TO_BE_REPLACED

Rai Movie
YouTube
I’ve added 166 new pictures of Kristen arriving at the site for the press conference, 61 fanpics and 196 HQ pictures from the photocall in Venice on September 4th, 2015. She is wearing a Chanel ensemble and Jimmy Choo shoes. Pictures courtesy of kstewartfans.

I’ve added 12 new pictures of Kristen at the #Equals Dinner in Venice on September 4th, 2015. Pictures courtesy of kstewartfans.

Kristen Stewart and Nicholas Hoult star in the ambitious new film from director Drake Doremus (Like Crazy), about a utopian future society where crime and violence have been eradicated through the genetic elimination of human emotion, and where those afflicted with the emotional “disease” are forced to go on the run.

For more details & tickets, check out their Site. 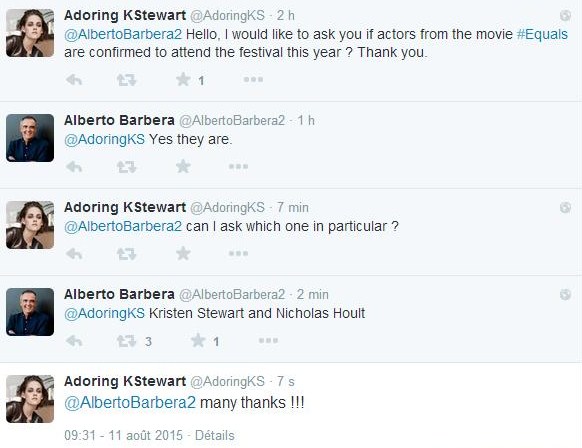 Many thanks to Alberto Barbera, director of the Venice Film Festival, for kindly confirming the information for us.