Kristen was a guest at the 2016 MET Ball on May 02, 2016 in NYC. She was wearing a Fall 2016 Chanel dress with heels and Repossi jewelry. This year’s theme was Manus x Machina: Fashion in an Age of Technology, and Kristen was supporting her new bleach blonde hair and silver make-up and nails.

Kristen on her way to the #MetGala [via Getty Images SnapChat] pic.twitter.com/8mzm7c3PsQ

"Kristen do you love being blonde"
Kristen: "YUP" source WMag via @Mel452 pic.twitter.com/MNvWaJr1Fv

KRISTEN SCOOPING SOMETHING AS SHE POSES LMAOOO I LOVE HER pic.twitter.com/D3izxWuEce

NYTimes : Or as Ms. Stewart put it in a text message: “Adir has a forward energy. It moves everyone around him.”

Into the Gloss : Now, the ‘best looks’ from any event are subjective, particularly at the annual Met Gala. It’s one of the red carpets that really shouldn’t have police. But putting that aside for a moment, can we all just agree that Kristen Stewart’s beauty look at the Manus X Machina debut last night was spot on? Good, because we called up her makeup artist Jillian Dempsey (Adir Abergel hopped on the phone for a hot sec, too) to get the full tutorial. Wanna guess what we’re wearing out this weekend?

Jillian: “This collaboration was so fun—very fun and festive. [Laughs] We always have an idea of what we’re going to do at the beginning, and we really just leaned into it. Adir [Abergel] was on hair and Ashley Johnson on nails—we all had a really good time. And I’ve been working with Kristen for 10+ years…but tonight was special in its rawness.”

[Adir hops on the phone…]

Adir: “Hiii! We were really thinking about the late ‘80s, early ‘90s transition into technology—that’s when I was really growing up and experiencing it. That period was all about grunge, so that’s why we bleached out her ends. I pulled a lot of references for that period for me. It was about punk and grunge. It was about the people breaking the mold.”

[Adir hops off because it’s 10pm and he hasn’t eaten dinner yet. Back to Jillian.]

Jillian: “Kristen’s eyes have such a nice shape, we almost always do a worn in eye on her. We wanted it to still have that look, but with a bit more of a chrome punch. I started with a base of Chanel’s Stylo Fresh Effect Eyeshadow in Vert Grisé—it’s like a gel chubby shadow stick. With that, we started to creat the shape, and then with a nylon angled brush I went over it with silver shade from the Les 4 Ombres Quadra Eyeshadow in Tissé Ombre de Lune. Once you press that it, it looks like foil. Then we cut it out in a geometric shape and then we said OK! We didn’t want to get too precious about it. Get the concept, apply it to the human, be done.

We did go over it with a bunch of liner—Chanel Stylo Yeux Waterproof Long Lasting Eyeliner in Ébène, which is super-longwear. Then I did about three coats of mascara, added a little custom-cut false lash to give it a bump, and then a little more liner to make it all blend in together.

The rest of her face we wanted to look really luminous but not too heavy. I blended out Vitalumère Aqua with a sponge and my thumb, and then did a bit of Powder Blush in Rose Pétale. For lips, I just did Rouge Coco Ultra Hydrating Lip Colour in Adrienne and then gave it to her to have in her bag. I wanted her to have that and a bit of powder for touchups. You know, don’t be shiny in photos—just the eye should be shiny!”

New #CampXRay Stills and Behind the Scenes Pictures 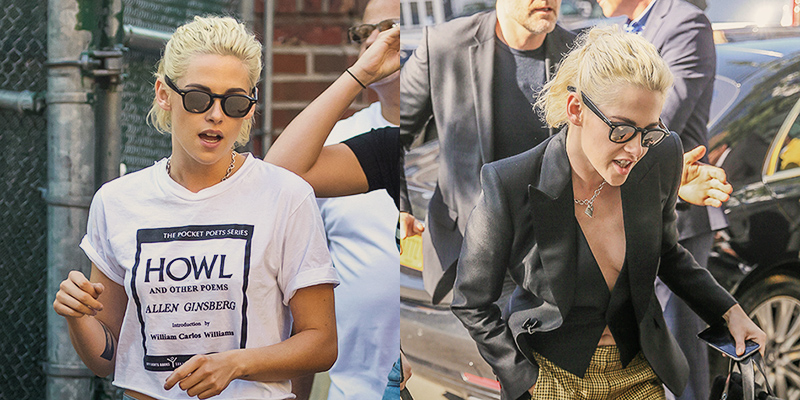